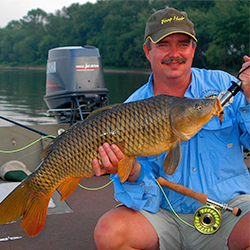 Scott Loughner of Rillton, Pennsylvania has been a fly fisherman and fly tier for over forty years. Scott has been a fly tying and fly casting instructor for nearly 30 years. As an author, Scott has written articles for Mid-Atlantic Fly Fishing Guide, was at one time the fly fishing columnist for Pennsylvania Woods and Waters, and has presented papers on fly fishing techniques to The Harrisburg Fly Fisher’s Luncheon Group and The Fly Fisher’s Club of Pittsburgh.
Scott is a member of the Temple Fork Outfitters Ambassador Staff, a manufacturer of fly rods, fly reels and other fly fishing equipment also on.In addition Scott is on the pro-staffs of Chota, a manufacturer of waders and wading shoes, and is an advisor to Gamma Technologies, the manufacturer of Frog Hair leaders and leader and tippet materials.
Scott Loughner’s fly patterns have appeared in Mid-Atlantic Fly Fishing Guide magazine, Eastern Fly Fishing Magazine and other publications. In addition,Scott has recently become a fly designer for Holly Flies, an importer of fishing flies.
Scott serves on the board of directors of the Pennsylvania Fly Fishing Museum helping to preserve the rich history of fly fishing in Pennsylvania.
Scott is an active member of the Fly Fishers Club of Pittsburgh. In the year 2000 he received the clubs Fly Fisher of the Year Award and in 2011 was the recipient of the Tom Prusak Memorial Award. Scott is also a member of the Harrisburg Fly Fisher’s Club and Trout Unlimited.
Scott has taught over 1600 students through demonstrations, classes on Fly Tying and Fly Casting, as well as Fly Fishing Techniques at both the beginner and advanced levels. In addition, Scott has volunteered his time and knowledge for programs with several high schools, local Boy Scout Troops and many fly fishing organizations. Using the skills learned from many years on the streams, rivers, lakes and the oceans of the Mid Atlantic Region, as well as being a fly fishing guide, and the many lessons learned from his mentors Lefty Kreh, Bob Clouser and many others too numerous to mention, Scott’s experience and easy going teaching style keeps him in demand for both group and private lessons.
While continuing to grow in the sport of fly fishing Scott is proud of his accomplishments thus far but none more so than a quote from his friend and mentor Lefty Kreh, Fly Fishing’s greatest ambassador.
A quote from Lefty Kreh. “I started fly fishing in 1947 and around the planet met many fly tiers and fishermen. Many good fly fishermen either don’t tie or do a poor job. Many terrific fly tiers I discovered were not effective fishermen.
Scott Loughner is one of the finest tiers I’ve known but is also a great caster and superb fly fisherman. That’s a rare combination in our sport.”

You have probably heard about the International Fly Tying Symposium being postponed for November 21 & 22, 2020. Now some good news. The Hilton has just rescheduled us for November 20 & 21, 2021. So stay healthy, tie some flies, fish with them and look forward to the 30th anniversary of the symposium being celebrated just one year later.